The art of drag: Brandt Eisner’s dazzling, conceptual costumes at the Craig 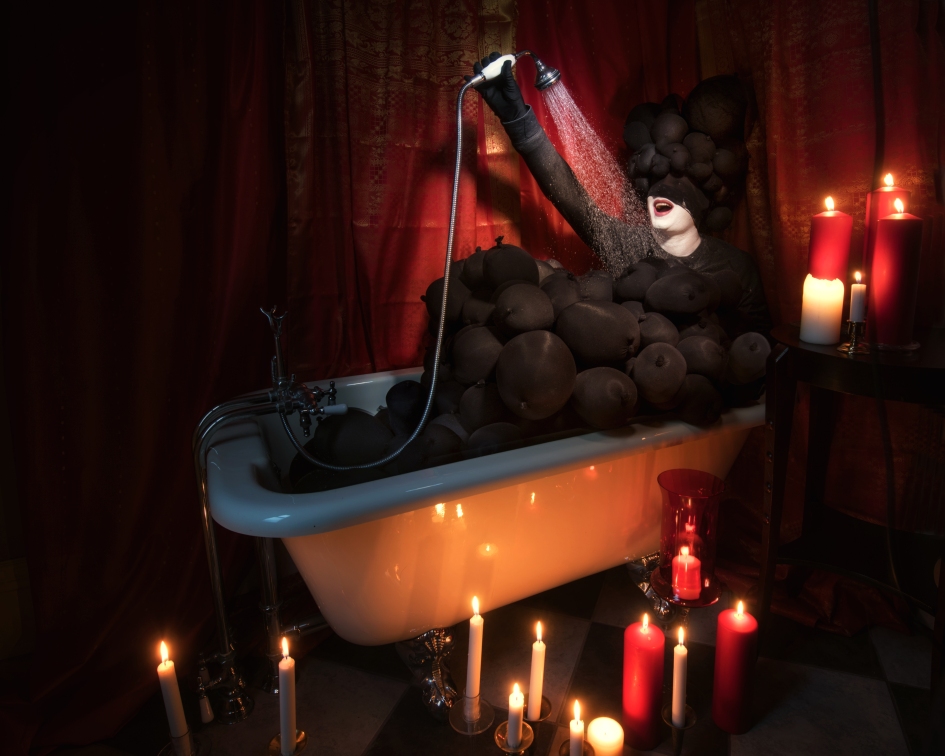 Brandt Eisner’s balloon dress is in Splitt — The Art of Drag, at the Craig Gallery. What does it mean? — “I don’t even know! Some people see these as tumours, some people have thought breasts. To me it’s so interesting what other people see.”

Brandt Eisner’s amazing costumes for drag performances are a chance to see art fashion in Halifax without going to an international museum.

The Halifax visual and performance artist – former owner of Swoon Art Gallery – exhibits work related to contemporary drag in Splitt – The Art of Drag, at The Craig Gallery, Alderney Landing,  to Aug 11, with a talk Saturday, 2 p.m.

This show is rich in art costuming that is outlandish, creepy, comic-book-glamourous, sometimes conceptually rich, other times pure fun like a Christmas dress made out of tiny, metallic bows.

“I’m obsessed with people who are creative in what they make for the body. Alexander McQueen is way up there,” says Eisner. He also loves the work of Thierry Mulger, now on exhibit in Montreal..

Though Eisner came to drag performance later in life, his passion for building sculptural garments from re-purposed materials goes back to his student days at NSCAD University and the university’s annual wearable art shows.

“I was always very quiet about the fact I did drag,” says Eisner, whose main art form is  mixed media, sculptural, social commentary.  “There is so much misunderstanding about what that is. 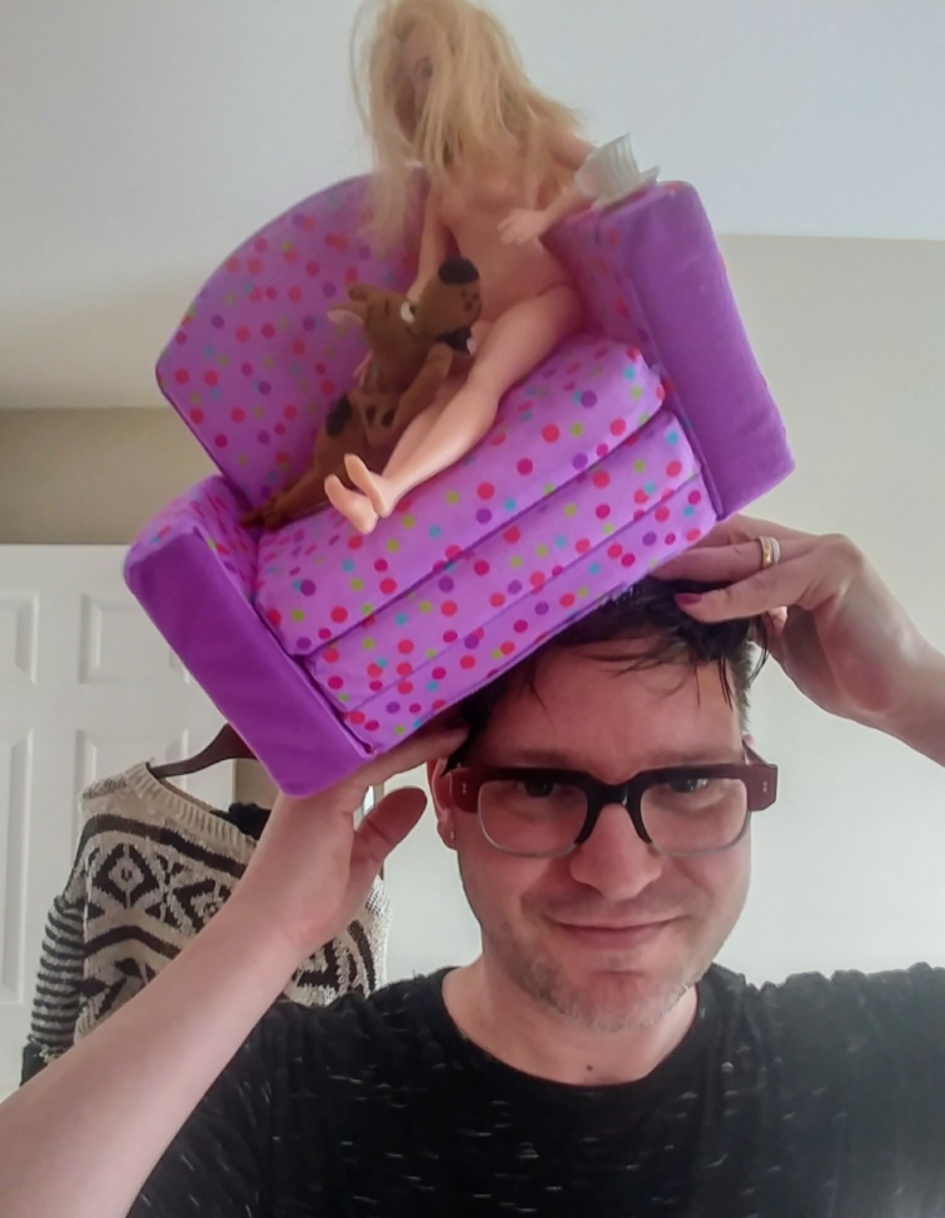 Eisner wears the hat for his dolls’ head dress.

For years he avoided drag because he was shy and didn’t want to perform traditional drag. He wanted to use edgy, contemporary music; introduce bizarre, even gruesome characters, as opposed to pretty ones; subvert gender expectations and “bring crazy costumes to the table.”

The late Halifax drag queen Lulu LaRude convinced him. “I said, ‘I don’t think anyone would want to see what I want to do,’ and she said, ‘What would you do?,’ and I said, ‘Bjork,’  and she said, ‘Ok, do Bjork.’

“She gave me permission to not have to blend in with what everyone else was doing,” says Eisner.

“I love doing a show where the first half I do this female character and then in the second half I come out and do this gruesome male character. It’s fun to play with expectations. “

This exhibit includes his version of Bjork’s controversial, white swan dress worn by the Icelandic artist at the 73rd Academy Awards in 2001 and a super-glittery costume for a Madonna mashup that refers to Picasso in cubism and Dali in a dripping clock.

Eisner’s drag costumes and performances often deal with thorny social issues. A dress made out of stitched-together sports jerseys, accompanied by a red-jeweled football helmet, is part of his Shirts vs. Skins show, going to the Saint John Art Centre this summer.

The show deals with “the hyper masculinity of sports and expectations of little boys to grow up in that culture.”

His dress of ripped bible pages with a necklace of an upside down, red-jeweled cross is “a big FU to religious dogma.”

“So many of our ideas around body and sex are so ingrained in religion. For anyone who is very open there is always this understanding that it comes with risk and judgment, and when you hit smaller towns the danger goes up. You have to prepare that you are always going to be judged.”

Eisner grew up in Chester Basin, “a very religious community where I was always going to be wrong,” he says.

“When I performed this I was ripping up the bible and somebody was super offended and wanted their money back and stormed out. I was in a gay bar! I’ve done a number of performances where people have left and I love it.”

One of his  inventive, playful pieces includes a headdress of tiny doll’s heads from Barbie to Frozen’s Anna. The dress includes a hand of dolls’ arms. 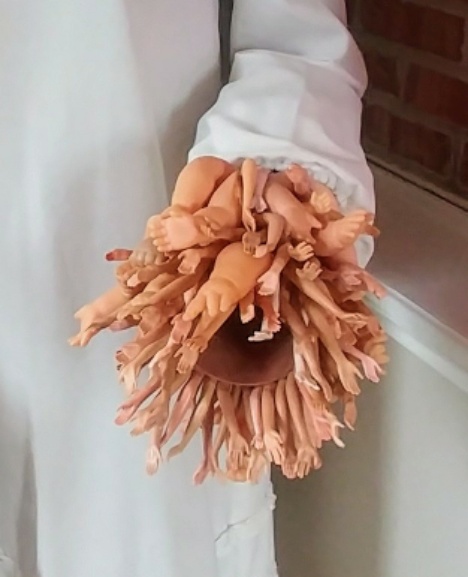 His work can be conceptual. His dress and headpiece of handwoven wire, which he wears when performing “creepy characters” is both a sci fi reference to androids and cyborgs and a consideration of a human future full of technology with an increasingly robotized workforce.

He likes doing beast-like characters “not monsters but on the verge of monster with animal qualities. ” They are connected to the idea of sages or community healers.
“There’s always been in cultures this individual who was in some ways the drag of their community. They were magicians,  healers, the shaman. In indigenous communities they were the two-spirited people. ”

RuPaul has popularized drag through the award-winning reality competition series RuPaul’s Drag Race. He’s known for this line in the Born Naked song, “We’re all born naked and the rest is drag.”

In Halifax he admires people who go out in public dressed as who they are.  “I can’t bring myself to do that. It’s brave to me that people can go out and look like their authentic self not caring about judgment.”

“We are at an interesting point socially where we are raising children who are creative and sensitive and free to be who they are but on the other side we have conservative extremism flaring up and threatening to take away all the things people have fought for. We could lose all of this at any moment.”

Splitt is part of the Halifax Pride Festival. Eisner is involved as a drag mother in Swine, July 25, and performs in the Summer Spice Variety Show Friday at the Marquee. 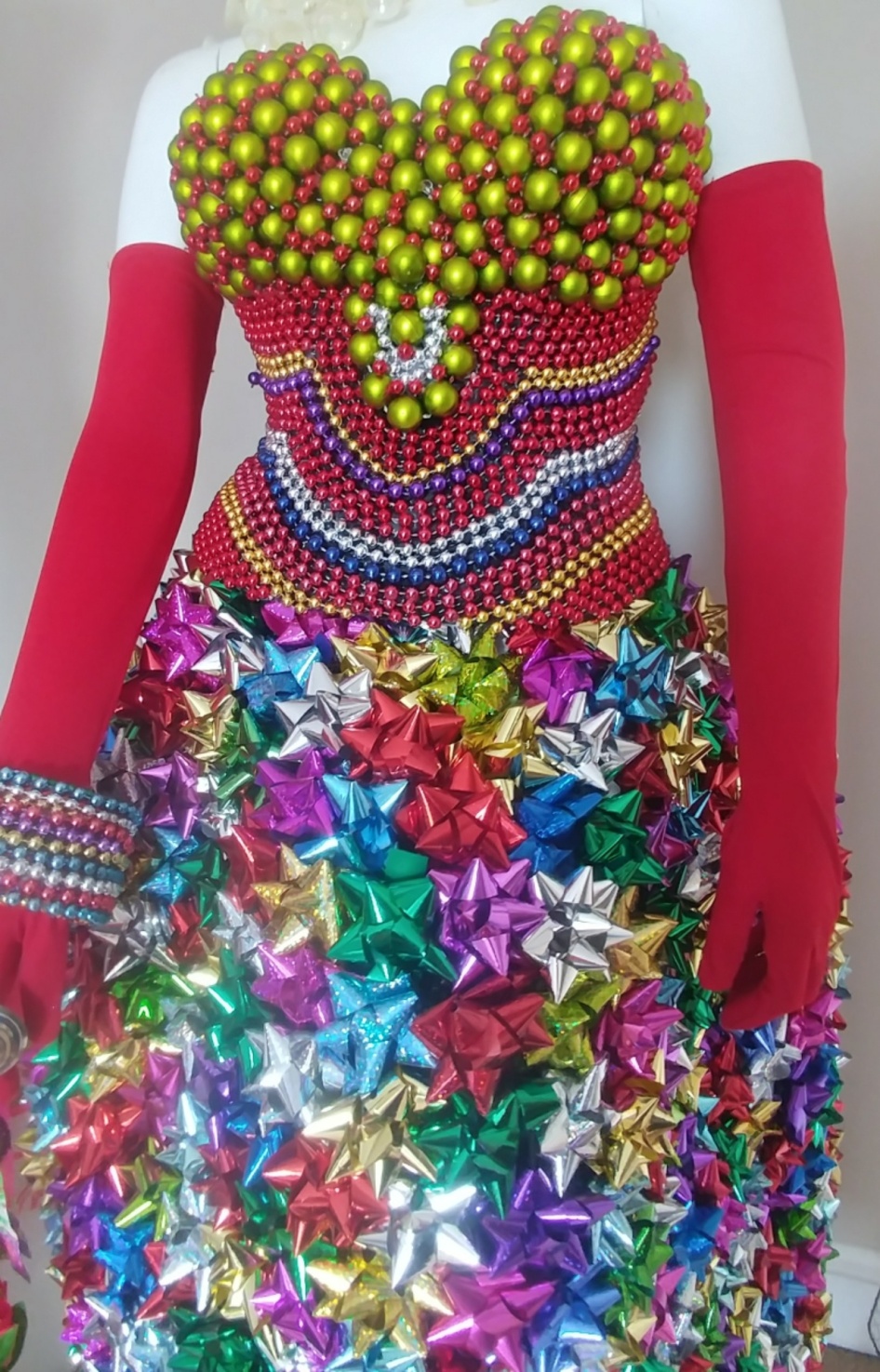