The Collapse, by Roxanne Smith, is in the show she shares with Kathleen Flanagan at ViewPoint Gallery, 1459 Brenton St., Halifax. The gallery is open daily, 12 to 5.

“I always think of her when I’m there,” says Flanagan. “It’s so clearly a house that’s occupied by ghosts – by memories, by feelings, by impressions, by thoughts.

“That’s what I saw in all the objects. They’re filled with an emotive power.”

Her square-formatted photographs are of oft-painted white door handles and locks, floral linoleum and wallpaper, typewriter keys and lace curtains, all seen at the level of a child’s eye and with what Smith calls a child’s “intense gaze.”

“So many elements I saw remind me of when I was a child,” says Flanagan. “I hope people will reflect on the memory of their childhood.” 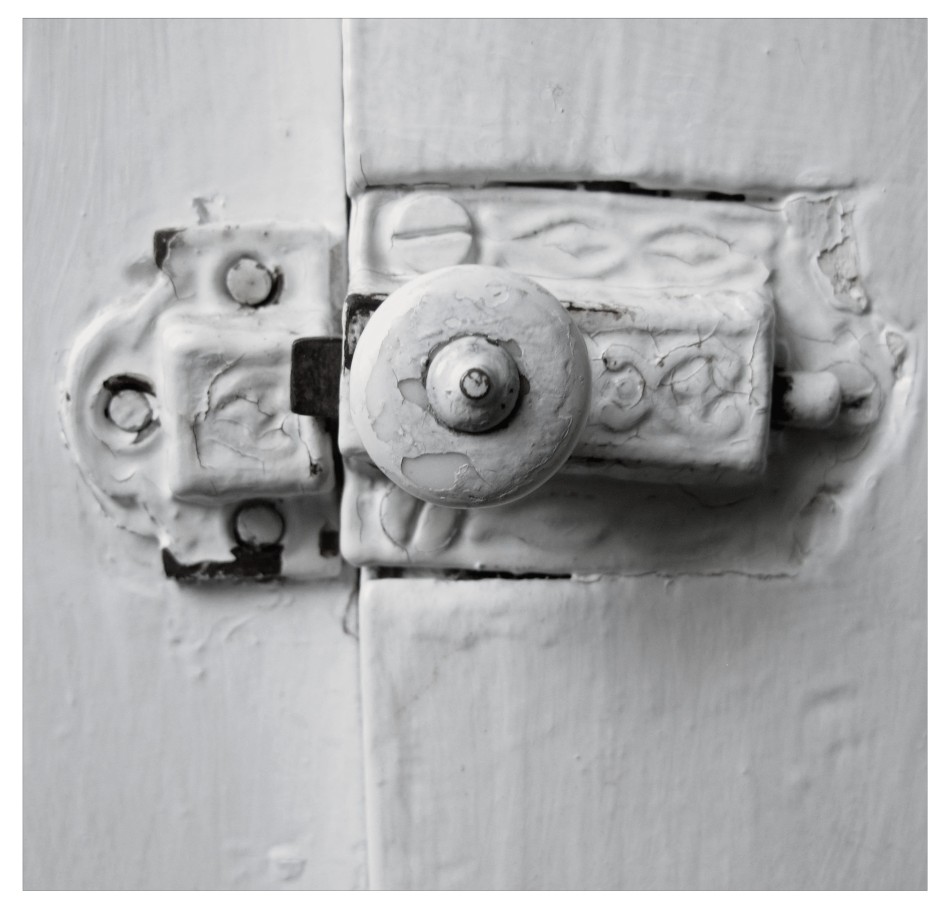 This much-painted lock reminds artist Kathleen Flanagan of Bishop’s line from Crusoe in England: “Home-made, home-made! But aren’t we all?” Cast on a bronze plaque, it is  placed on St. James United Church in Great Village.

Smith connects to the tragedy in Bishop’s story in haunting narratives of a figure moving in a blurred, ghostly way through the house.

Bishop was born in 1911 in Worcester, Mass., and her father died when she was a baby. Her mother took her back to her parents’ home in Great Village, but when Elizabeth was five her mother had a mental breakdown and was hospitalized at the Nova Scotia Hospital.

Bishop was taken back to Worcester by her paternal grandparents and raised in the United States but never forgot Nova Scotia. “It’s in her poems. You can tell,” says Flanagan, whose husband loves poetry and read Bishop’s poems to her.

The writer, considered to be one of America’s best 20th century poets, talks about her mother in the prose piece, In The Village, which she wrote later in life.

“It begins with a scream,” says Smith, “and ends with it may have happened or it may not have happened. It begins as something solid and at the end it dissolves.

“In the house you can’t help but think of the mother falling apart and the child losing her,” says Smith.

She describes her black and white storytelling photographs, each in sets of three, as “depictions of memories of things that may or may not have happened.”

Using herself as a shadowy model, she depicts a figure that could be Bishop’s mother going down the steep stairs to leave the house forever.

A second series is of  a rocking chair with a blurred figure crumpled against a wall behind it. “I was thinking again about descent and collapse. One thing is solid and the other is a collapse in a corner confined behind the bars. I want these to be opened-ended stories.”

Though Smith does work in colour, she didn’t want the distraction of colour.  “I wanted the feeling you get by just focussing on the subject and the place.”

Flanagan, who usually explores social issues in her art, chose a square format for this  work to pare down visual information. “I am opting for simplicity.”

She intends her exploration of latches, keys and other fasteners to suggest locking and unlocking and to “allude to hidden secrets, suppressed feelings and forgotten memories opened with Bishop’s poetry.”

Both artists are passionate about old houses in rural communities – houses that have seen joy and pain, birth and death, and are often abandoned due to out-migration to cities and other provinces.

“Nova Scotia is filled with houses that look like this,” says Flanagan. “Part of the Nova Scotia story is about out-migration like Elizabeth Bishop’s mother who moved to the Boston states for work. That would have been a very typical story and there are other familiar elements like grandparents taking care of the grandchild because of something that’s happened. It echoes with a very common Nova Scotian story.”

“I feel houses must have a memory of a sort of the people who lived there,” says Smith, “and in that respect it’s like anyone’s house.”

Both artists’ favourite Bishop poem is One Art, which about loss and moving on.  (Sadly, the private, self-critical poet suffered tragedy again when her lover, the Brazilian aristocratic, self-trained architect Lota de Macedo Soares, committed suicide after an intense 12-year relationship.)

This poem, says Flanagan, is the linchpin for the show:

One Art
by Elizabeth Bishop

The art of losing isn’t hard to master;
so many things seem filled with the intent
to be lost that their loss is no disaster.

Lose something every day. Accept the fluster
of lost door keys, the hour badly spent.
The art of losing isn’t hard to master.

Then practice losing farther, losing faster:
places, and names, and where it was you meant
to travel. None of these will bring disaster.

I lost my mother’s watch. And look! my last, or
next-to-last, of three loved houses went.
The art of losing isn’t hard to master.

I lost two cities, lovely ones. And, vaster,
some realms I owned, two rivers, a continent.
I miss them, but it wasn’t a disaster.

—Even losing you (the joking voice, a gesture
I love) I shan’t have lied. It’s evident
the art of losing’s not too hard to master
though it may look like (Write it!) like disaster.

Beginning of In the Village (Dear Reader, please read to the end to get to the last fantastic line):

A scream, the echo of a scream, hangs over that Nova Scotian village. No one hears it; it hangs there forever, a slight stain in those pure blue skies, skies that travellers compare to those of Switzerland, too dark, too blue, so that they seem to keep on darkening a little more around the horizon— or is it around the rims of the eyes?— the color of the cloud of bloom on the elm trees, the violet on the fields of oats; something darkening over the woods and waters as well as the sky. The scream hangs like that, unheard, in memory— in the past, in the present, and those years between. It was not even loud to begin with, perhaps. It just came there to live, forever—not loud, just alive forever. Its pitch would be the pitch of my village. Flick the lightning rod on top of the church steeple with your fingernail and you will hear it. 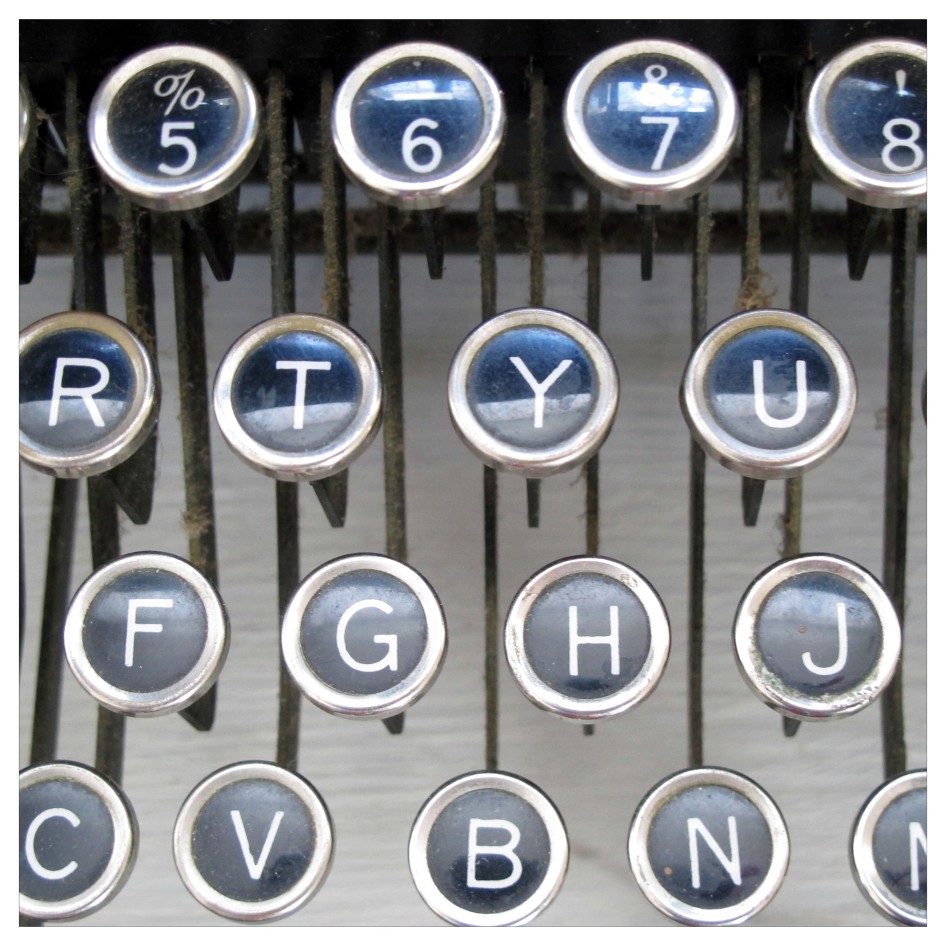 Typewriter, by Kathleen Flanagan, who says of Bishop, “Not only did she make her living from writing. She made her life from writing.”