Reliquary of the Carita: grounded on Money Point 1975-12-20, by Genny Killin, metal from a shipwreck, plaster, dye, velvet, in Rag and Bone, opening today, 5-7 p.m., at the Craig Gallery, Alderney Landing, Dartmouth, with a talk Saturday, 2 p.m. Shows ends May 26.

People visiting Genny Killin’s house are startled by a heaping basket of bones in her dining room.

The Halifax artist, whose solo show Rag and Bone opens today at the Craig Gallery, refers to bones, mortality and the passage of time in compelling, charged sculptural works of plaster, driftwood and found metal.

Her inspiration comes from both  “history and things past – dead, forgotten and found,” she says, in an interview in her Halifax studio.

“I’ve been obsessed with that since I was a little kid. There’s nothing more thrilling than finding little bits of pottery shards or bone or teeth. I remember wanting to be an archaeologist in grade 2 and digging things up in the backyard.

“Bones,” she says. “We all go back to bones and it’s all that’s left behind. It’s not sad or morbid. It’s just acknowledging that we all come to this in the end — animals and humans..”

These profound, poetic abstracts with references to nature have deliciously textured surfaces of pitted plaster and polished wax with rich, yummy colours that are stains of ink and dye.

Killin loves juxtaposition – making hard plaster look like the soft folds of Renaissance drapery, adding the artifice of paint and plaster to kinetic spears of driftwood, jarring an earthy palette with pops of unnatural colour.

Her art is fed by her passion for the abandoned places she has discovered while hiking and kayaking. Reliquary of the Carita Grounded off Money Point 1975-12-20 features  metal fragments from the Carita shipwreck close to Cape North in Cape Breton. It’s an area she’s paddled to and camped in many times working and touring with the Coastal Adventures seakayaking company.

Genny Killin in the wild with a bone in her backpack.

“There used to be a lot of activity on the coast of Nova Scotia and Newfoundland and there is less and less. These are memorials to that and to the little scraps of things people leave behind.”

She holds up a netted shopping bag and a tiny, wooden, pink, doll’s tray from an abandoned Newfoundland outport called Indian Burying Place on the Baie Verte Peninsula.

Killin loves forgotten history and the mystery of human and animal lives within it. She sees all her works as reliquaries marking an object’s  “dot on the timeline of infinity,” she says. “These are a bridge between the unknowable past and the unknowable future.”

Killin is also inspired by Victorian displays of curiosities and the idea of artifact. She uses black velvet to give heightened value to discarded bits of human and animal life.

Her series, The Fates, features three, velvet, gothic windows each holding a hand-built plaster form like a seed pod that is divided in half and pierced by a painted stick.

Raised a Catholic, she says these do refer to church windows. “I’ve been looking at that window shape my whole life. It has a very Catholic feel and it is like the burning heart of Jesus. That imagery has never left because it’s part of my growing up.”

However, she doesn’t intend these works — named for the Greek, weaving goddesses who allotted the span of an individual’s life —  to be religious. “It’s the mystery of the sacred, the seen and unseen. These are the hardest ones to talk about. They’re pretty romantic and poetic in that Gothic way.”

A graduate of the Nova Scotia College of Art and Design, Killin was a figurative painter before she took a break from artmaking to work in theatre and television, making and designing costumes and props, and doing set decoration.

At the Halifax CBC-TV props shop “we played with a lot of materials,” says Killin, “I would not have gotten here if I hadn’t been a props builder at CBC for 30 years and worked with Fred Allen. He was my mentor.

“I’ve also renovated a bunch of houses. I really like the malleability of plaster and the durability of it.”

After her job was eliminated due to CBC cutbacks, she went back to art but was having trouble finding a new path.

“I had this big, art breakthrough sitting on a rock on a kayaking trip. I love the abstract, formal shapes of rocks and trees and bones and I’ve always been interested in more abstracted shapes but I was finding it hard and I got this idea of doing textured, layered things out of paper but that was too fiddly.

“And then I thought of plaster and I saw the plaster works of Henry Moore at the Royal Ontario Museum and I thought plaster will work for me. I can shape it into whatever I want.”

Plastering is an ancient technique going back to the primitive humans who plastered mud over stick and reed frames. “People have been doing plaster since mud and wattle,” says Killin. The Egyptians decorated plaster surfaces in their palaces and pyramids.

Killin sets her plaster over a manipulated, underwire structure to make pieces that look like fabric, wood or bone. “The plaster gives it stiffness and shape and longevity. It’s done essentially like a lathe wall.”

While her works refer to bone, Killin does not use actual bones in them. “I find it to be too precious. It was a live creature and it’s a little bit sacred.”

As opposed to her black and white pieces in 5 Women, 1 Room at the Chase Gallery in 2018, these works are alive with colour — both deeply saturated, aquatic blues and poppy 1960s pinks and lime greens that have an unnatural quality.

Her definition of art is “organizing, editing, situation.”
“It has to be organized by you, it has to be edited – that would be composition – and it has to be put in the right situation — on a board. It’s placed in a way that says I am art.

“Art for me has to be manipulated. I’m not Marcel Duchamp who stuck a toilet on a wall and said that’s art. That broke things open but that’s too simple (for me.) It’s art and artifice. I have an intent.”

Killin has a BFA in painting from the Nova Scotia College of Art and Design and a Certificate of Costume Studies from Dalhousie University. She has exhibited in group shows and created outdoor, site specific, public installations for the Uncommon Common Art project for the last six years. 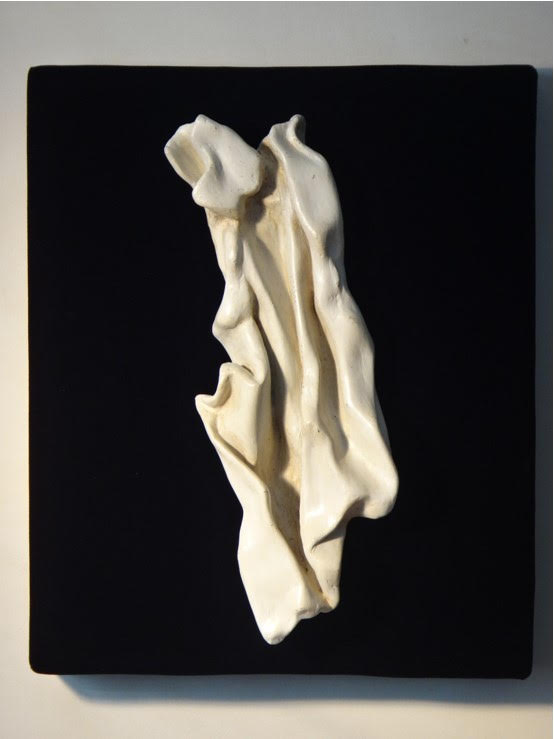