THEATRE THAT MAKES YOU THINK 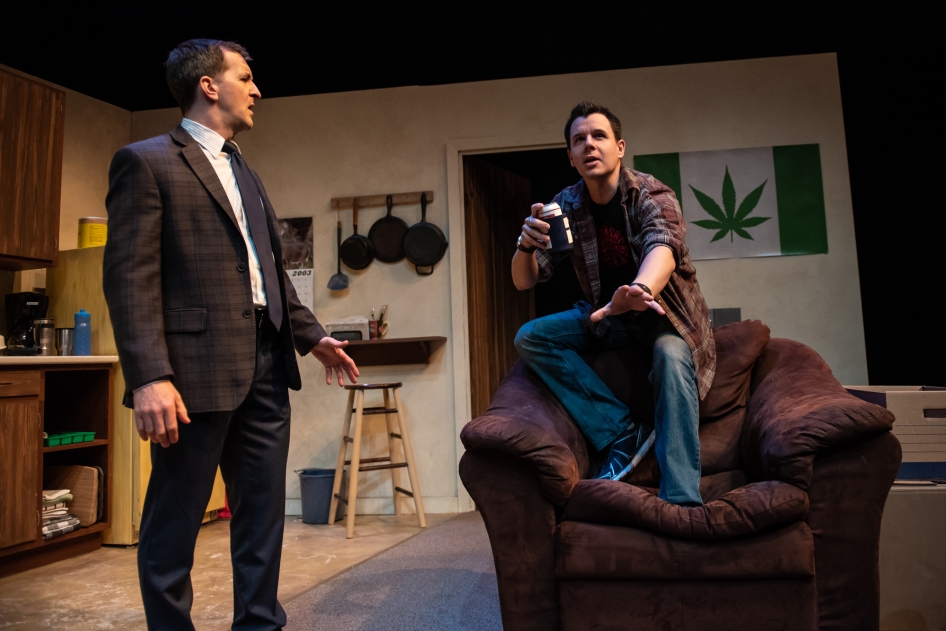 Ojibwe playwright Drew Hayden Taylor’s In a World Created By a Drunken God is a thought-provoking, funny play about big issues in life.
Would you give a kidney to a stranger? Would you give a kidney to a family member? What if that family member were a stranger?
That’s the issue for Jason, the son of an American father and an Ojibwe woman. He’s packing to move back to his reserve just when the doorbell rings. In sweeps the annoying, gnat-like but compassionate Harry, the half-brother he never knew he had.
Harry has been raised in Providence, Rhode Island, by a happily-married man who only once in his life transgressed by meeting Jason’s mother on hunting trip to Canada. He abandoned her and her baby.
Harry has arrived to ask Jason to take a blood test to see if he’s a match for a kidney for his dying father. Needless to say, Jason is reluctant.
This drama is a tug of war and the author plays the dilemma of will-he-or-won’t-he right up to an atypical and lovely, piercing ending
Jason, fully realized by Ontario Metis actor Sean Hauk, is a hostile, lonely man who dominates the space in his crappy Toronto apartment. He is both difficult to like and easy to pity.
He physically overpowers the slighter, urban Harry, played by Halifax actor Jeff Schwager with a lot of fire and poise.
Harry’s life has been framed by a belief in a Leave It To Beaver family. A divorced father and not the most likeable guy either, he is a frustrated, passionate, verbal fighter capable of chipping away at Jason’s armour.
However, he has idea of Jason’s experience as an abandoned infant and a First Nations man. He can’t step into those shoes – like most of us in Canadian society when it comes to Indigenous pain, identity and social issues.
In his intense play Hayden Taylors questions identity, definitions of family, social responsibility, the cultural differences between Canada and the U.S. — to comic effect – and the cultural differences between white and First Nations people — also to comic effect but not always.
If you like theatre that makes you think and get inside people you’d normally never meet this is it.
This fine production, directed with a great sense of emotional rhythm and timing by Pamela Halstead, has a great, gritty set of a run-down apartment with the sound of traffic and a lighting design that keeps the space feeling claustrophobic.
These are mere men but also mythic titans wrestling in a small space about life and death, love and hate, the loner and the communal man.
Set design is by Katherine Jenkins-Ryan and lighting design by Jess Lewis. Also on the creative team are: Helena Marriott (costume designer), June Zinck (sound designer), Jacob Planinc (assistant director), Karen Bassett (fight director), Laurie Fleet (apprentice stage manager), Raven Davis (cultural sensitivity consultant) and Ingrid Risk (stage manager).
In a World Created by a Drunken God, a finalist for the 2006 Governor General’s Literary Award for Drama, is the final Studio series production for Neptune’s 2017/2018 season. It runs at Neptune’s Scotiabank Stage through Sunday, May 20.
Tickets are available online at neptunetheatre.com or by phone (902-429-7070) or toll-free (1-800-565-7345), or in person at the box office, 1593 Argyle St., Halifax.