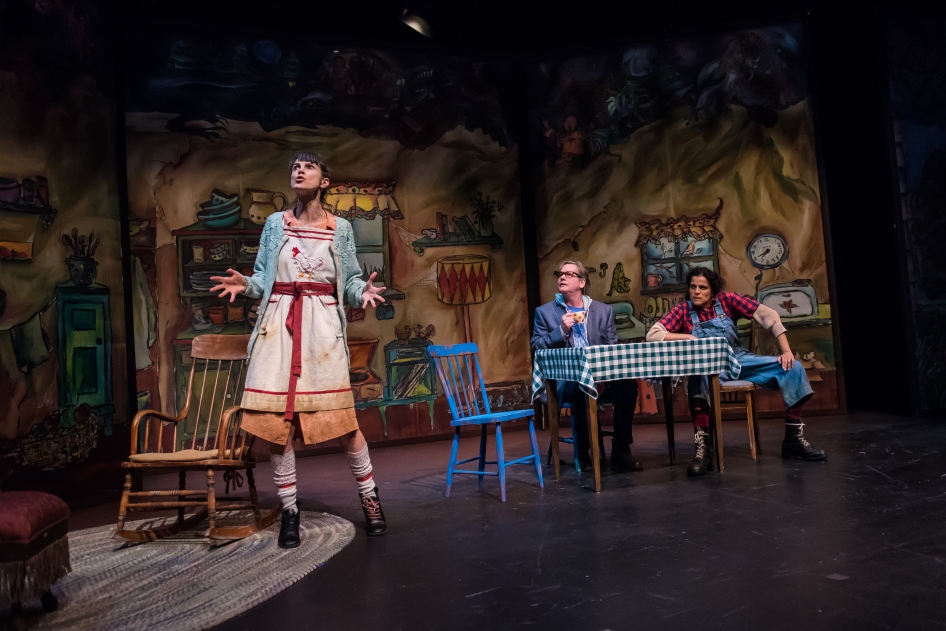 Genevieve Steele stars as Sugar Mary with Christian Murray as a folklorist and Sharleen Kalayil as her sister Yewina in Eastern Front Theatre’s premiere of Mary-Colin Chisholm’s Half-Cracked: The Legend of Sugar Mary, presented by Neptune Theatre at its studio theatre in Halifax to April 1.

Nova Scotia playwright Mary-Colin Chisholm’s new comedy, Half-Cracked: The Legend of Sugar Mary, is a wild, enchanting ride into the lives of two unusual sisters who love storytelling – and chickens.
The magic realist writing, the glorious set of Holly Carr’s storybook, silk paintings and a  magical use of props make this a highly intriguing show apart from the top-notch performances and good laughs.
Reality is super heightened in a two-hour play with intermission as Sugar Mary constantly mythologizes her limited existence. One day when she’s talking to her favourite chicken, Sheila, she senses imminent change.
Just then the folklorist Scott, with a broken-down Volvo, knocks at the door much to the surprise of Sugar Mary’s suspicious, straight-shooting sister Yewina.
Hungry for company, Sugar Mary barrages Scott with community stories, gossip and a legend that he thinks is fit for his long overdue masters’ thesis.
The first act sags a bit with a lot of storytelling and little action. The second act is a hilarious firecracker with a final touch of pathos as Scott reveals his Norwegian folk dancing skills, Sugar Mary acts on her dreams of love and sex, the chickens are in peril and a mystery is solved.
Genevieve Steele, nominated for a 2018 Merritt Award for her portrayal of an odd, malevolent sister in Snake in the Grass, turns all her physical and vocal skills to this equally isolated but benign, funny character in a highly kinetic, sparkling performance. She beautifully manages Sugar Mary’s character tic of mangling and mispronouncing words.
Steele’s magnificent performance is beautifully balanced by Neptune newcomer Sharleen Kalayil’s richly detailed, solidly comic turn as the terse, hunter-provider Yewina, annoyed by – yet fiercely protective of – her sister. Christian Murray’s Scott is wonderful, particularly in the purely comedic moments.
Director Martha Irving keeps the verbal furnace stoked and the stories in motion as Chisholm reveals and celebrates these marginalized, rural characters,  partly inspired by tales she has heard over the years in her native Antigonish.
The silk paintings and the words are a match made in heaven. Carr’s panels playfully  describe a kitchen set;  at their tops are images from Sugar Mary’s tales lit up for each telling.
The ingenious use of  movement, props and sound design recalls the visual joy in Sheldon Currie’s Lauchie, Liza and Rory.  You hear the sound of tea being poured from an invisible pot into a real cup. When Sugar Mary opens an invisible cookie jar and offers it to Scott he somehow pulls out a real cookie. There’s magic afoot.
Apart from Carr as scenic artist, the design team includes set designer Garrett Barker, costume designer Jordyn Bochon, sound designer June Zinck, lighting designer/stage manager Ingrid Risk, choreographer Ryanne Chisholm and assistant director Jacob Planinc.
An Eastern Front Theatre world premiere, presented by Neptune Theatre, Half-Cracked is on stage to April 2 in the studio theatre.

Note: Next up at the studio theatre is Drew Hayden Taylor’s In a World Created by a Drunken God, May 1 to May 20. The Merritt Awards are March 26 at the casino.